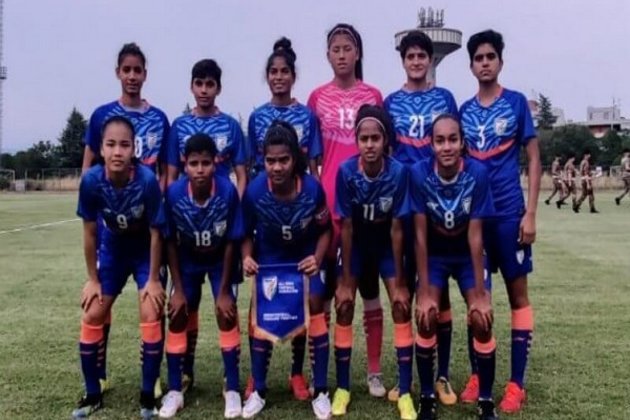 Rome [Italy], June 23 (ANI): India U-17 women's team suffered a 0-7 defeat against Italy in Grandisco D'lsonzo in the Female Football Tournament on Wednesday.

India started off the match just like the way Thomas Dennerby would have wanted, by trying to press the opposition high up the pitch and trying to bring out mistakes from them. Tackles were flying in from both sides and Italy were awarded a free kick in the 4th minute. Beatrice curled the free-kick but she narrowly missed the target.

Italy almost took the lead in the 10th minute as Dragoni was one-vs-one against Indian goalkeeper Monalisa but the latter stretched and produced a wonderful save to deny the Italian. However, India's resistance would be broken soon as just one minute later, Maria Rossi put the ball into the back of the net.

In the 22nd minute, Monalisa was again called into action by Dragoni, but the former again parried the ball out for a corner. India came the closest to scoring at the half-hour mark when Anita tried a long-range effort to catch the Italian defence off-guard but her shot missed the target by a whisker.

The floodgates would open after that though as Anna Longobardi and Giulla Dragoni scored in the 31st and 33rd minutes, respectively, to give the Italians some much-needed cushion. In the 36th minute, Kajol went for the spectacular but she too missed the target by a whisker. The Young Tigresses trailed the Italians by a 0-3 margin at the half-time break.

Italy picked up right from where they left off in the first half as Manuela Sciabica scored in the 48th minute. A couple of quick-fire goals followed after that as well and within 15 minutes of the second half, Italy had extended their lead to six goals. Thomas Dennerby made some changes in the 60th minute as Neha, Rejiya, Babina and Pinku came on for Nitu, Lynda, Kajol and Shelja, respectively.

Marta Zambomi scored the final goal of the game in the 67th minute as she stretched Italy's lead to 7 goals. (ANI)