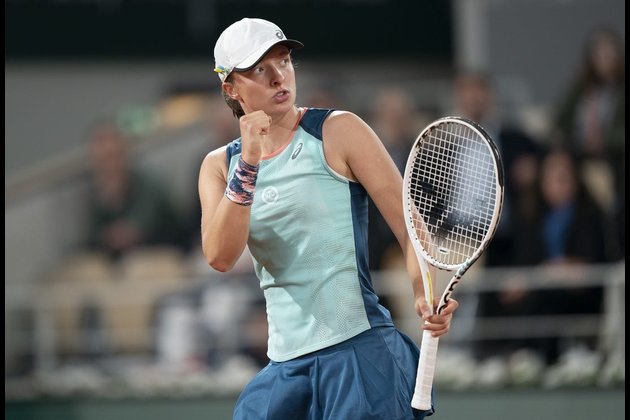 Top-seeded Iga Swiatek of Poland cruised into the third round of the French Open on Thursday with a straight-sets win over Alison Riske.

Swiatek needed just 61 minutes to oust Riske 6-0, 6-2. Swiatek won 84.6 percent of her first serves in a command performance and extended her winning streak to 30 matches.

No. 3 seed Paula Badosa of Spain also advanced but didn't get through quite as easily. Badosa had to fight off Slovenia's Kaja Juvan 7-5, 3-6, 6-2 in two hours, 17 minutes. Badosa finished with 35 winners against 25 unforced errors and converted 6 of 9 break point opportunities.

Shelby Rogers upset No. 9 Danielle Collins in a battle of Americans, 6-4, 6-3 in 76 minutes. Rogers broke Collins six times in 11 attempts to advance to the third round.

Another former champion also fell Thursday as Chinese teenager Zheng Qinwen upset No. 19 Simona Halep of Romania 2-6, 6-2, 6-1 to claim her first victory over a Top 20 player. Zheng is playing in just the second grand slam of her career. Zheng recorded 27 winners to just nine for Halep.

"This match was full of emotions through and through. I managed to unroll my tactics to make her move back and forth, to put spin on my ball." Jeanjean said. "It's incredible thinking that I actually won in two sets against a Top 10 player, a previous No.1 worldwide. It's incredible."

Other seeded winners included No. 11 Jessica Pegula, No. 22 Madison Keys, No. 16 Elena Rybakina of Kazakhstan, No. 20 Daria Kasatkina of Russia, No. 28 Camila Giorgi of Italy, No. 29 Veronika Kudermetova of Russia and No. 30 Ekaterina Alexandrova of Russia.