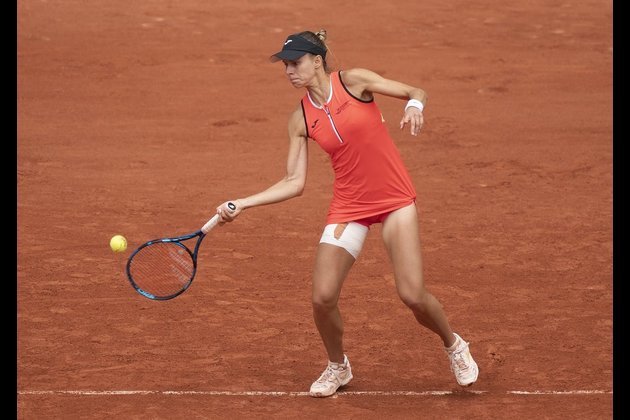 Magda Linette of Poland and Kaia Kanepi of Estonia recorded impressive comeback victories over top-10 seeds Sunday on the first day of the French Open in Paris.

Jabeur has been one of the hottest players on tour in recent months but was unable to maintain an early lead.

Jabuer had more winners (35 to 32) but committed 47 unforced errors while Linette had 35.

It represented a nice turn of events for Linette, who lost to Jabeur in the third round of the 2021 French Open.

"I had so many tough matches with Ons, and last year here I lost to her in the third round so I knew how difficult it was going to be," Linette said afterward. "I saw how well she was playing all this time, so I knew I have to be focused and play every single point and try to make her uncomfortable. I'm just happy I managed to fight for every single point."

Kanepi's knockout of Muguruza isn't as stunning. According to the WTA, it is her 19th career win against a seeded player in the first three rounds of a Grand Slam event, fourth-most among active players.

"It's not easy to play a tough opponent in the first round, but I think I enjoy playing Grand Slams more and I think the motivation is higher than smaller tournaments," the 36-year-old Kanepi said. "I try to be more focused and not too emotional when I play in Slams."

Fourth-seeded Maria Sakkari of Greece avoided the upset bug as she cruised to a 6-2, 6-3 victory over Clara Burel of France. Sakkari had 24 winners to Burel's 13.

No. 14 seed Belinda Bencic of Switzerland had few issues while rolling to a 6-1, 6-1 win over Reka Luca Jani of Hungary.

Canada's Leylah Fernandez, seeded 17th, staved off two set points in the second set while winning the last four games to finish off a 6-0, 7-5 victory over Kristina Mladenovic of France.

No. 23 Jil Teichmann of Switzerland delivered an easy 6-2, 6-1 win over American Bernarda Pera (34 unforced errors), while No. 26 Sorana Cirstea of Romania beat Germany's Tatjana Maria 6-3, 6-3 and 31st-seeded Elise Mertens of Belgium was a 6-3, 6-1 winner over Elena-Gabriela Ruse of Romania.

Unseeded American Sloane Stephens rallied from a set down to knock off German qualifier Julie Niemeier 5-7, 6-4, 6-2.

Belgium's Alison Van Uytvanck advanced when American Ann Li retired with a shoulder injury. Li was leading 6-3, 3-2 when she decided she couldn't continue.